x
by postmemory
on January 19, 2015
under observations
∞ Permalink

The reopening of the Monnaie de Paris during the Paris Christmas season was accompanied by Paul McCarthy’s intoxicating exhibition, The Chocolate Factory. It was a multi-level installation taking up many of the opulent rooms on the 2nd floor. As you walked through the process orientated exhibition you were confronted with huge inflatable sex toys, giant white plastic chocolate molds, a crude chocolate-making laboratory, shelves of fresh chocolate santas and trees, and the moaning and groaning from a confusing multi-video projection. McCarthy made sure all of your senses were bombarded by forcing you to meander through the maze-like rooms in between shelves and boxes stocked with chocolate sculptures.

The video projections were made in response to an incident where one of his giant inflatables situated in Vendome a Paris, was punctured and deflated prior to the show opening on October 25, 2014.The site-specific video documents McCarthy writing and reading in a child-like manner on large sheets of paper. He wrote the comments and insults the Parisian public confronted the artist with. Walking through the installation you were rewarded at the end with the option of purchasing the edible chocolate sculptures from the gift shop thus completing this Western consumerist cycle.

Entering the building, you climbed a grand staircase and were presented with large (4-10m) inflatable wafting plastic structures. These ‘trees’, as the artist Paul McCarthy titled them, actually doubled as sex toys. They seemed striking and out of place but to know Paul McCarthy’s work is to know his work exposes the underbelly of the Los Angeles, Hollywood consumer culture. 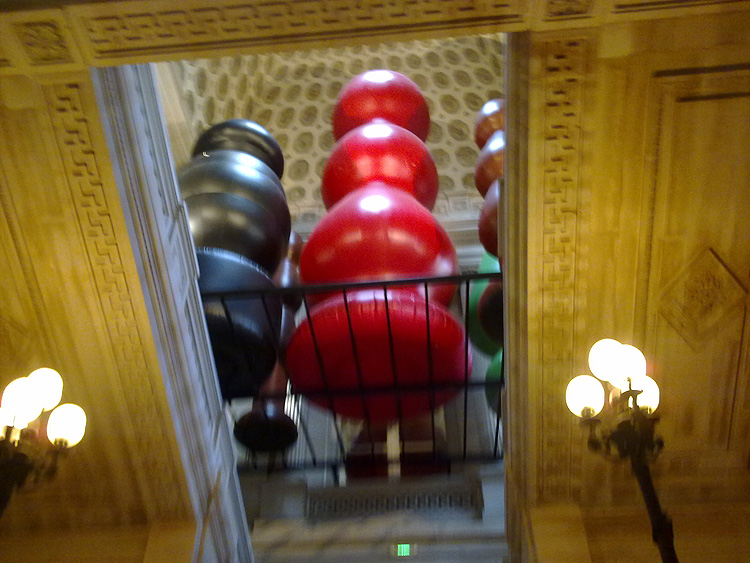 The intoxicating smell of sweet chocolate was unavoidable. Freshly made chocolate santas and ‘trees’ await to be installed or placed in the installation.

On the 2nd floor was the Chocolate Factory, a constructed structure with no ceiling that resembled a flimsy film set more than a productive chocolate factory. Workers or performers dressed in red jackets and wearing gaudy blond wigs produced chocolate santas and trees. They methodically performed the act of filling molds with fresh molten chocolate and then clipped them onto a large rotating machine. The molds were then massaged and popped out to be displayed. 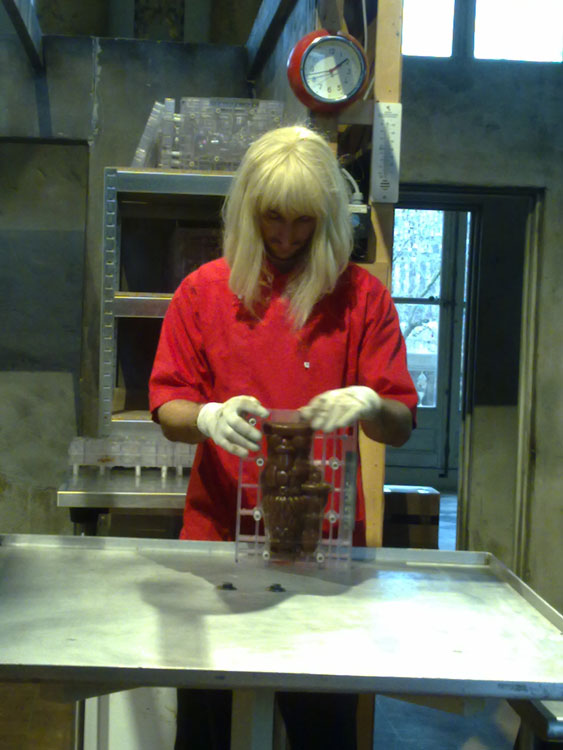 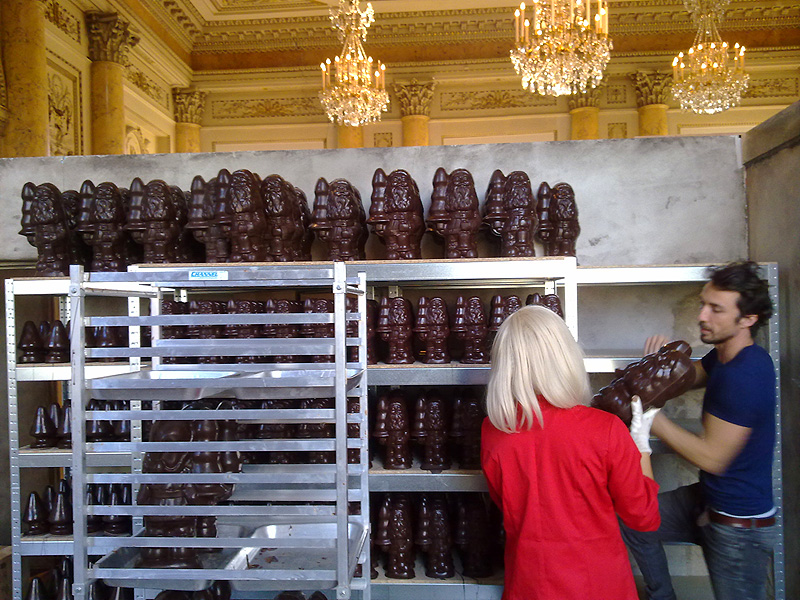 Performers stocked santas on metal sheves. From here they were dispersed into one of the other rooms as part of the installation. 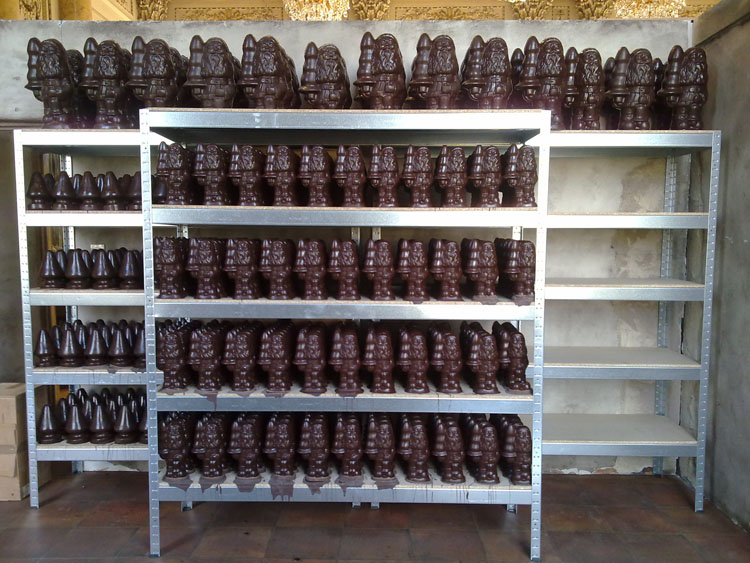 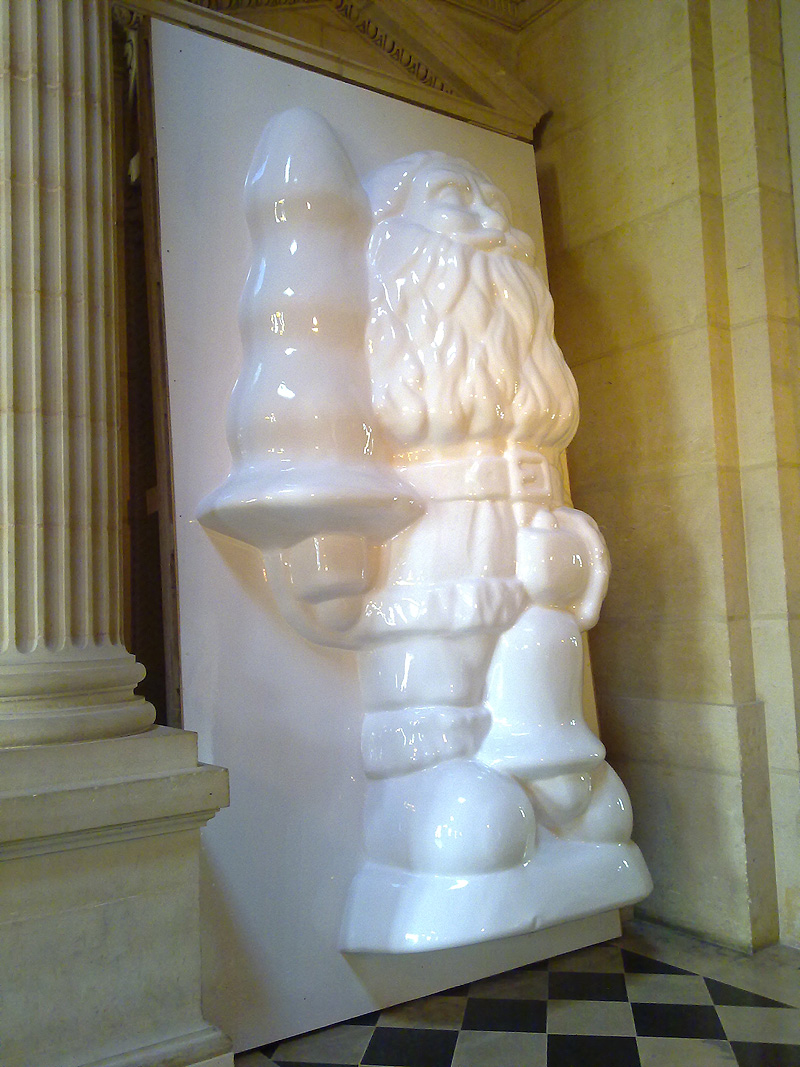 The video projections were presented in darker rooms of the installation which invoked a dreamlike atmosphere.They became a counterpoint to the hurried pace of the production of the factory. The sound was often inaudible and humorous as you tried to understand and decipher McCarthy’s words. Each day the entire installation grew with more and more sculptures thus exposing the challenges and love of our production society. 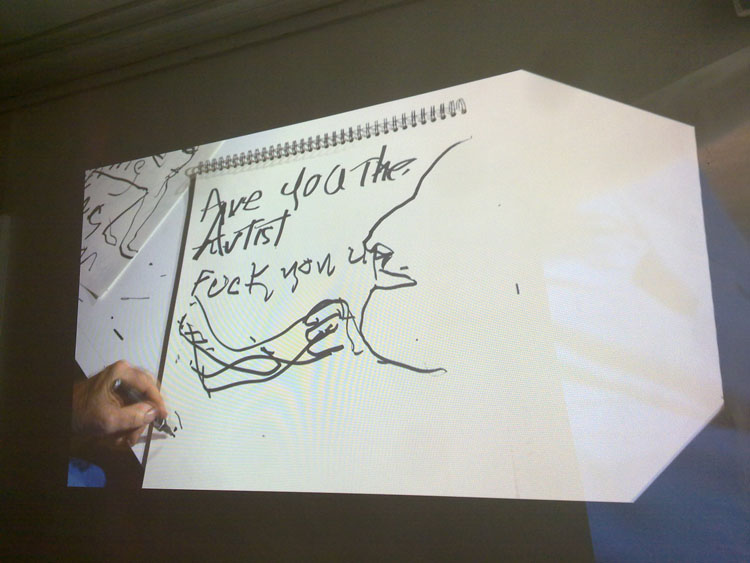